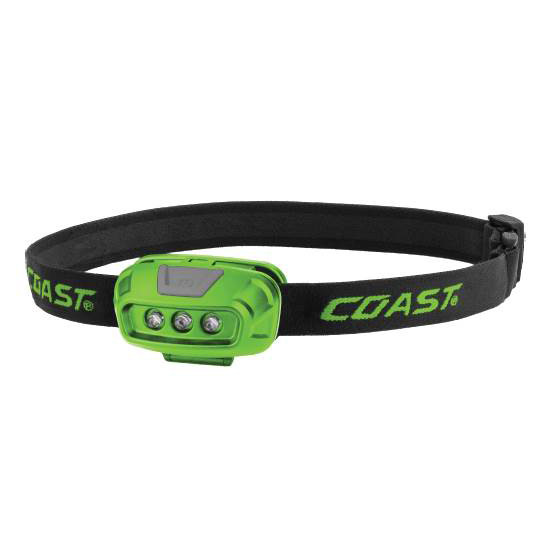 In a stand out lime green, this  Coast FL14 LED head torch is perfect for quickly bringing light to a dark corner or bilge. With 37 lumens and 4 modes, this is a compact and handy head torch. There are 2 white Led's and 1 red LED which means the torch is able to offer both low power white light, high power white light and solid or flashing red light. The red light is especially handy on night passages both keeping your natural night vision and not waking those down below. The 2 AAA batteries slot neatly into the back of the lightweight head torch. Useful on a dinghy, yacht, walking the dog or keeping to hand in dark winter months.

Coast Torches are tough, waterproof nearly unbreakable torches for sailing, outdoor activities, hiking or working. The mix of torches and lanterns offered by Portlands USA based Coast spans inexpensive head torches as a grab and go, walk the dog or hunt in the bilge type lighting all the way to military grade super bright focussing rechargeable hand torches or spotlights. Coast Torches are tested, reviewed and well regarded, the torches themselves are genuinely rugged, we have dropped them, taken them swimming, abandoned them in salt water and generally put a torch through its paces, they survive and ready to work. Sailing torches do have to be tough, salt water is a killer, a head torch will be knocked and dropped and they have to work, sometimes in life or death man overboard situations or tricky navigation (especially lobster pots!). As a minimum, the headtorches and hand torches and lanterns have a 5-year warranty and some are a lifetime.