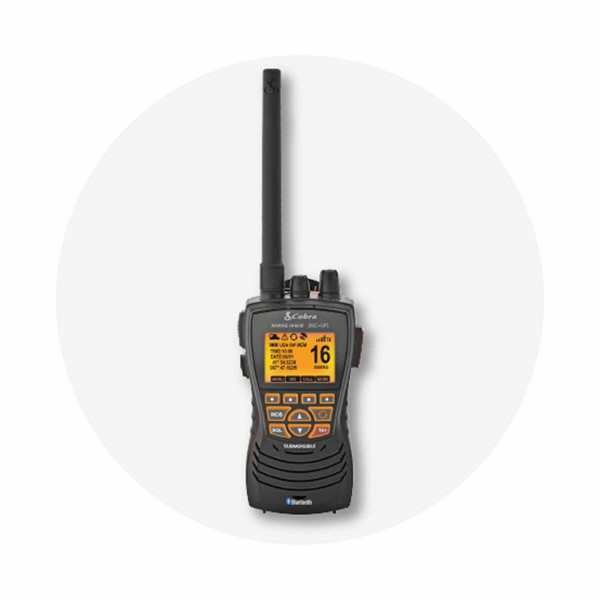 A floating handheld marine VHF with GPS, DSC & Bluetooth in one neat package. The Cobra MRHH600 VHF is practical, rugged and setting a new standard. For the price this really is a lot of VHF.

A built in GPS shows coordinates on screen and can transmit the location via the DSC calling button, The max 6 Watts radio is powerful enough to be a main set for those closer to shore or a back up/emergency VHF for larger vessels. The radio has an orange back to help you spot it in the dark or in a hurry, if dropped in the water it will float and has a waterproof rating of IPX8. The microphone uses noise cancelling technology and the Cobra BURP concept helps keep the speaker clear of water.

Safety features include a MOB button to mark the position of a man over board and the radio has a built in light which can be used to signal for help and flashes automatically when in the water.

Worried about missing something? No longer with a a 'Rewind-say-Again' function that Cobra has set to replay missed VHF calls.

Bluetooth, no longer is there need to bring your phone on deck, the wireless bluetooth technology allows you to make and receive phone calls from the handheld VHF (you did read that correctly!)

Cobra VHF's offer exceptional value for money, the latest features such as DCS and bluetooth as well as a tough rugged and dependable design. Fixed or handheld VHF units perfect for inside a yacht at the chart table, at the helm or on a RIB. Waterproof, rugged and floating options mean that Cobra is offering something for everyone. Low priced handheld VHFs as well as sterdy fixed units. Good value is not to be confused with budget, each VHF has numerous features, easy to read display, multi channel monitoring a playback option and several power and battery configurations.